A Brave and Powerful Girl

A Brave and Powerful Girl

Every now and then you read a story that needs to be shared.  My friend Sean O’Brien wrote this inspirational article about a brave and very powerful little girl.  If everyone had Maddie’s attitude, our world would be a much better place.

Please watch this short video clip and then take a few minutes to read this meaningful story about a beautiful little girl.

“If people stare at me, I just smile at them and they smile back,” Madison Woytovich.

There are billions of people on the Earth, with countries and cultures as diverse as is imaginable. The nonverbal message of a smile is understood around the globe.

Its power revealing the positive mind and full heart of the person sending the message, while also inviting the intended receiver to reciprocate by responding in-kind. 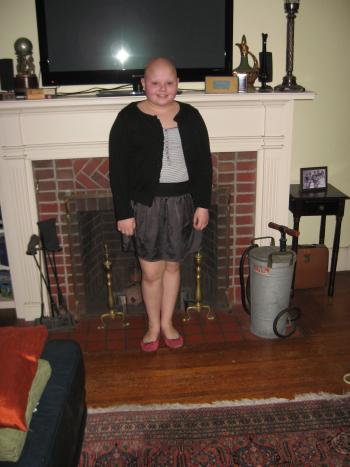 The most typically recognized form of Alopecia is Anodrogenic, also known as male and female pattern baldness. Madison Woytovich has the autoimmune disease Alopecia Universalis, which causes a total loss of hair on the body.

The incurable disease attacks and paralyzes the hair follicle on a molecular level which causes it to fall out.

When I met this twelve year old girl and her family, I was instantly put at ease. It only takes a moment to recognize the support Madison (Maddie) receives from her parents and siblings.

It only takes another to realize that the strength she projects has reached well beyond her family.

Not diagnosed until recent decades, Alopecia Areata affects between four and five million Americans. Many people who have the condition are unrecognizable because their hair loss is so slight.

Less than 200,000 people in the United States have the forms of Alopecia Areata defined as Universalis or Totalis, which causes a majority of hair loss above the neck to occur.

The first sign that Maddie had the disease appeared while she was in kindergarten in October, 2003. As her Mom was fixing her braids, her hair started to come out.

“I think I was scared, but not as scared as my parents. So, I began wearing bandannas and hats. No one could tell the difference. Then, we had a play at school and I had to wear a Native American headdress. When I took it off I could see that the audience was staring at me,” Maddie recalled.

After contacting the National Alopecia Areata Foundation Maddie’s parents were directed to a group that met in the Hershey area. Jeff Woytovich drove his daughter to a weeknight meeting where they met with five adult women and one boy who had Alopecia. The meeting featured a video about wearing wigs and false eyelashes.

“We went through stages of loss similar to death, because Maddie lost something permanent in her life when she was diagnosed with Alopecia. But, you have to get to the acceptance stage so you can move forward,” Jeff Woytovich said.

Woytovich and his wife Betsy recognized that there was a need that had to be filled and took action.

“When you are a parent and there is something wrong with your child, you just want to fix it if you can,” said Jeff.

After attending another meeting, he asked the National Foundation if he could start a group that was specifically focused on children. He was told that he couldn’t start a support group for children, but could start one that was open to everyone. So, he and his wife decided to found their own 501(c)(3) organization. They named it the Children’s Alopecia Project, also known as CAP.

CAP’s goal is to build self-esteem, provide support for children and their families, and raise public awareness of the disease. The organization has no membership costs.

(The National Alopecia Areata Foundation effectively manages fund raising related to disease research, so CAP decided not to direct efforts in that area.)

“CAP wouldn’t have grown to where it is today without the internet, “ Betsy Woytovich said.

CAP’s website ChildrensAlopeciaProject.org was launched in 2007. The award-winning interactive website provides online support and offers chat rooms for parents and teens across the country. People from over 50 countries have accessed the site since its launch, helping CAP membership grow from 50 children to over 700.

“We have been in touch with people throughout the world including North America, Asia, and India,” Betsy Woytovich said.

The organization also has the largest Alopecia presence of any organization on Facebook, with thousands of friends and an additional 5,000 followers on a separate Causes page.

Annual organizational events include a spring spectacular, gala, and silent auction that began seven years ago. To-date, just under $250,000 has been raised through those efforts alone. This year’s event is being held on Saturday, March 26th, from 7 pm to 11pm at Designer’s Place in the Vanity Fair Outlet in Wyomissing.

Alopeciapalooza is the organizations largest program for kids. The annual summer event began in Philadelphia in 2009, was held in the Poconos last year, and will be held in Ohio this year. The summer camp draws families from across North America.

The organization also has many other functions and events, including:

-Special events, lectures, and day trips for kids and their families

“When Maddie gets older we plan on continuing with this project, because over the years it has become about more than her,” Betsy Woytovich said.

According to research that Jeff Woytovich has conducted, CAP is the only non-profit organization that was founded, operated, and managed within Berks County that has since spread worldwide. In the future, they would like an executive director to operate the organization and also to establish regional offices.

The Woytovich family has also been involved in other community events besides CAP. They used their organizational expertise to coordinate the volunteer effort surrounding ABC’s Extreme Home Makeover –  Berks County Edition in the summer of 2010. 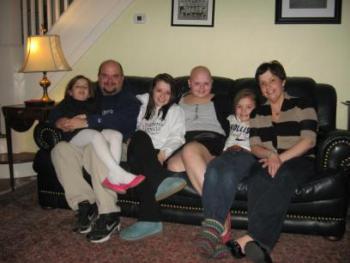 Maddie also has three sisters. Helena, who is 14, Sofie, who is 10, and Amelia, who is 6. Each is completely supportive of her.

“In the beginning people at school asked questions about Maddie, but once they understood what was going on they didn’t. Because of having Maddie as my sister I understand that people might look different, but they are still the same on the inside,” Helena said.

“She always plays with me and makes me happy,” says Sofie.

This young lady already understands the importance of media contacts, as she provided me with her business card that showed her title as President and CEO.

“I like when Maddie helps me with my hair and makeup,” Amelia noted.

Maddie Woytovich has a supportive family and many friends. Now in the seventh grade at Sacred Heart Catholic school in West Reading, she enjoys all of the things that anyone her age does. She plays basketball, volleyball, and runs track. Her favorite subject is religion class and someday she hopes to become a fashion designer.

The attitude and inner strength a person maintains generally determines the reality of their life. There is something very powerful about the way Maddie approaches hers. She puts everyone around her at ease because she has accepted her condition. With that, her life has continued to move forward.

“It makes me feel great to know what my parents have done for me and for other kids,” Maddie Woytovich said.

This article was originally published on Philly2Philly.com March 2, 2011.

If you or anyone you know has alopeica, please share your stories with us.  Thank you to Sean for sharing Maddie’s story with us.